Elvis Magnetised And Mesmerised. His Music Moved And Inspired A Generation!

This is Elvis and in the concluding volume of the trilogy Elvis: The Best of British, this time the focus is on the RCA recordings of 1959-1960 and, consistent with the previous volumes, contains over 500 pages. Discover exactly how Elvis, on his triumphant return from army service, reinvented his career at the top of the entertainment world when RCA declared 'Elvis is Back!' before the movie G.I. Blues changed his life forever. His story is graphically told through the music with over FIFTY iconic songs, originally released on the British RCA label, having been extensively researched. Over 1100 rare or previously unpublished photographs, charts and unique memorabilia, create a visually enhanced record of a superstar with unsurpassed acclaim. Read about the management strategy to keep Elvis' name in the public eye whilst he was away, which not only succeeded in retaining his image of more than just a singer, but as the pulse at the heart of a generation. With its wealth of invaluable information, this book includes: -

° Every known photograph and press cutting of Elvis in Scotland, his only time on British soil!
- ° Photographs from the pivotal meeting with Hal Wallis in a German restaurant where Elvis' future movie career was mapped out!
- ° The New York Elvis songwriter who was thrown into the East River by mobsters and the British composer who appeared on a - £10 bank note!

This book includes a 30 track CD featuring many performances officially released for the first time.

Hear Elvis personally introduce his British chart toppers during this two year period along with other classic tracks, rare movie versions and audio movie promotions. Add to that, exciting songwriter demos as Elvis first heard them and you will own a unique CD to treasure.

Elvis: The Best Of British, The RCA Years 1959-1960 charts the fascinating facts about Private Presley's RCA UK releases during these two years and Colonel Parker's plan to engineer Elvis' move away from rock 'n' roll to attract a new generation of fans whilst still retaining his crown as 'The King'. 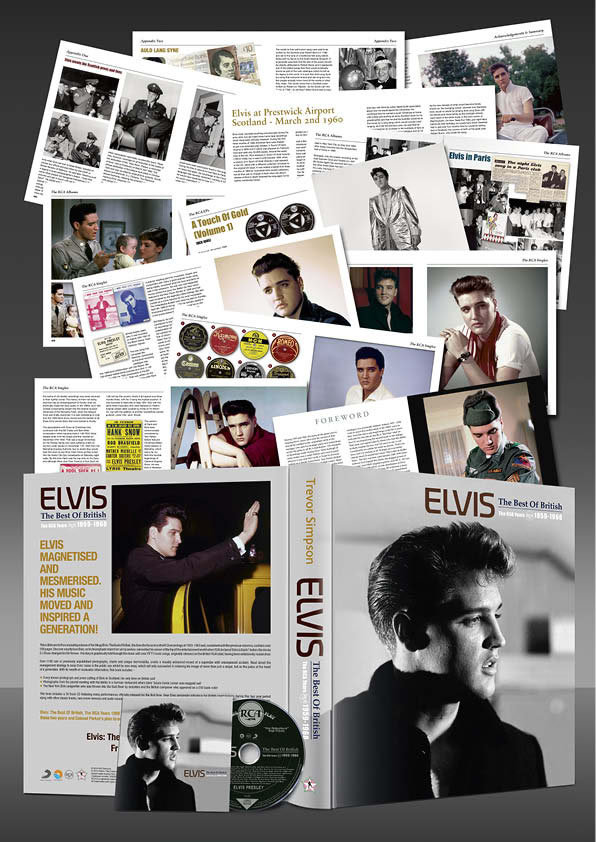 (Note: Composer credits for the song titles are listed within the book).

Elvis - The Legend: The Authorized Book from the Official Graceland Archive Hardcover Book

Elvis - The Legend: The Authorized Book from the Official Graceland Archive This book tells the pers