I would like to say the MRS / JAT Productions release of The Complete Louisiana Hayride Archives 1954-1956 CD is a dream come true but I can't as there was no anticipation something like this would ever be released. For years now we have had the basic el cheapo compilation of the basic tracks but now we have a full CD with a running time of over 75 minutes that gives a very good overview of Elvis in concert in the 1950s.

The big news is the recent discovery of Elvis' last Hayride show of December 1956 and while this is a huge part of this release there are a good many other components that make this CD special. Apart from the obvious completeness we have vastly improved sound quality on tracks such as Hearts Of Stone [January 15, 55] and Money Honey [January 22, 55] along with two version of Tweedle Dee and four of That's All Right.

Now talking of improved sound, MRS claimed to have speed corrected the newly discovered last Hayride show. I can't specifically notice a speed change, however as much as Ilove the Sony Young Man With The Big Beat 5 CD box set, the version of the concert on it gives me a headache!, the MRS release does not.

The tracks are well put together and we have the Hayride 'opening Jingle' to open the CD and close the final Hayride show and a touch of commentary giving us the feeling of 'being there'. Altogether a great production : Simply well thought out bring us what there is nicely wrapped in a hardcover with 88 pages of photos of Elvis on stage and an informative text. All 29 tracks therein are re-mastered using the most sophisticated technology. It includes restored and more complete versions of many of the tracks than ever before.

Another gem from MRS. You must own this CD!!!

The CD also contains the recent discovery of Elvis' last performance on the Louisiana Hayride in December 1956 as released on Sony's Young man With The Big Beat. This will be a more complete version of the show and for the first time, be speed and pitch corrected, which Sony has failed to master for their release.

The set also includes a 100 page hard back book with informative text and many rare and new photographs that were due to be shown first, in the upcoming FTD Sun book. 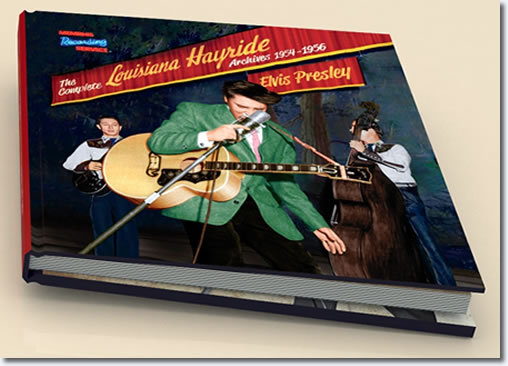