The Elvis I Knew by Charlie Hodge DVD (Elvis Presley)

The Elvis I Knew DVD by Charlie Hodge, with over 250 never before seen still photos and live film footage of stage performances and private times with Elvis. Charlie shares his heartfelt memories of his 17 years with one of the greatest entertainers in the world. Charlie's stories include his time by Elvis' side on stage, on movie sets, in the army, and personal time with the Presley family and friends at Graceland, in Vegas, and in California. Guest appearances include George Klein, long-time friend to both Charlie and Elvis, and accomplished radio disc jockey; J.D. Sumner, also long-time friend to Charlie and Elvis, and accomplished bass singer with 'J.D Sumner and the Stamps'; and last but not least Gordon Stoker.

Charlie Hodge Talks About Elvis (From this DVD) 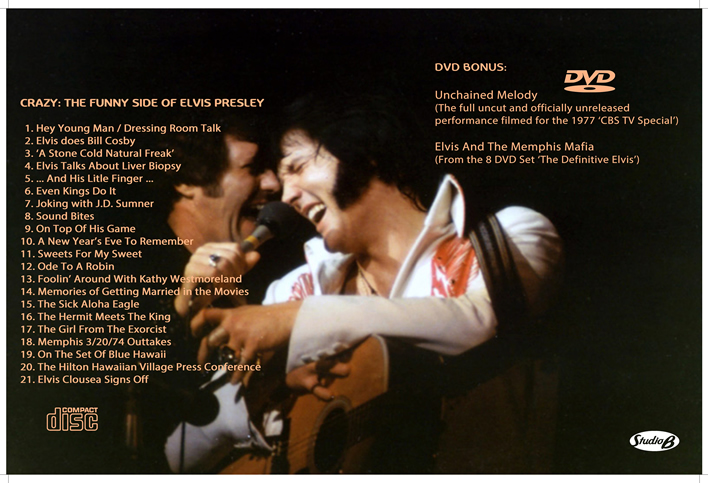 In this DVD Charlie remembers Elvis as a bright vibrant life with an exceptional soul. He got to witness Elvis' 'unequal generosity' and saw his impact on the whole world.

According to Charlie 'we are all just a little bit better for his having been'. This is definitely a must have for any Elvis fan. You will see a side of Elvis that only an insider could see. Get to know Elvis through Charlie's eyes and you will feel a little closer to the man that Charlie called his best friend.

I recently received my copy of this cd and I had pretty big expectations for it after what I had heard.

First of all, this is NOT just another 'talking album'.

After listening to it, it is clear that these spoken words have been carefully chosen out of hundreds of hours of Elvis recordings, both audience, and soundboards. Some of these snippets have been out before but think they are presented here in the right, and nice, package. I found it more interesting and fun to listen to this CD than for example the 'Having fun with Elvis on stage' albums. Also, the sound is clear and an improvement over the boots they have been taken from so I think they have done a great job with the remastering.

The content of this CD is really funny. You get a really good insight into Elvis' sense of humor and the great connection he had on stage with J.D. Sumner ('He is the worlds lowest bass singer in more ways than one...'). Elvis' own self-irony is clear when he talks about his past. When it comes to the press he simply says: 'I find out most things about myself by reading the paper!' and that is a statement that says it all! hehe... He introduces The Sweet Inspirations: 'Don't give them that much applause, they'll ask for a raise!' Funny comments like these through the whole CD...

Now, we are in for a treat. We get some unreleased stuff from Elvis' concert in Memphis on March 20, 1974. What we hear are portions that were edited out of the official release and the bootleg 'Steamroller Blues'. For the first time on CD, you get to hear the false start on 'Help Me' that was rumored to exist. It is also nice to get the Hilton Hawaiian Village press conference from November '72 before 'Inspector Clouseau' ends this CD ...or was it Elvis?

Conclusion: If you want a funny insight to Elvis' humor this is the CD to get. It is very well put together and is a CD you can actually listen to. It is a CD I can play to my friends that are not Elvis fans and it will still get them to smile.

Crazy: The Funny Side Of Elvis Presley CD

The Elvis I Knew by Charlie Hodge DVD

1956 was Elvis Presley's breakthrough year, and this program takes you back, including his early tel

Elvis: The TCB Gang DVD | The Way It Was | The Untold Stories (Elvis Presley)

The TCB Gang : The Way It Was : The Untold Stories DVD documentary has the last ever footage of

From the press release: Dave Hebler is the 10th-degree black belt 'Kenpo karate' champion who was