Pre-Order | Out Of Stock

'A Touch of Gold Lame' a 450+ page Hardcover book by Erik Lorentzen is the same size and weight (3.5kg / 7.7 pounds) as the Elvis Files books and will cover all you could want to know about Elvis and his 1957 concerts featuring the famous Gold Lame Suit.

Elvis Presley was throwing 5,329 people into a frenzy at the Arena last night when an egg came sailing at him from the balcony.

The egg missed him by a good three-foot and landed with a splash on the guitar of Scotty Moore, one of his three instrumental accompanists. Presley's sideburned face darkened into a frown, but he managed to finish his song, 'All Shook Up'.

'He got egg on his guitar', Presley told the audience. 'Whoever threw that will never make the Yankees'.

The master of the grind and the bump, by this time, appeared to be 'all shook up' himself a little. Turning to the audience, he said again, 'Most of you people came here to enjoy the show. The guy who threw the egg will never make it'. His blue eyes flashing Presley turned toward the direction from which the egg came and remarked with emphasis: 'I mean it, Jack. We're just trying to put on a nice show'. By this time, police were racing up the balcony, where a group of screaming girls were pointing to four youths.

For his final appearance, Presley, a one-time truck driver, wore a gold-braided jacket with white sequins on the cuffs, pockets, and lapels. He also wore a white satin shirt, black pants, and gold shoes. As he strode onto the stage for the start of his performance, the audience went wild with screams. Hundreds of camera flash bulbs went off. From time to time, as Presley warmed up to his act, many of the girls went into hysterics. Some burst into tears. After the show ended at 10:15 p.m., about twenty policemen rushed Presley off the stage and into a waiting automobile parked at the curb on 45th St. Fifty girls watched their idol being hustled into the car and fought to get near him. 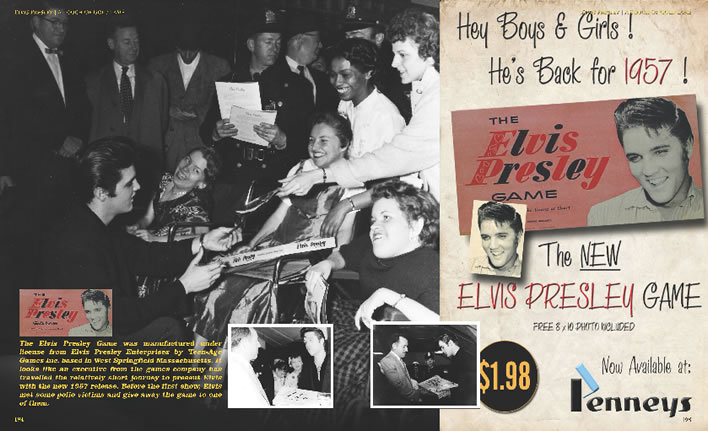 'Elvis Fans Give Me A Headache' by Helen Parmelee, Ottawa Journal - April 4, 1957

... Some wept, some moaned, some clutched their head in ecstasy; everybody screamed, stomped, clapped hands, flailed arms, and one person got down on all fours and pounded the floor. Elvis 'sent' them wild. Elvis 'sent' me too - home with a bursting headache. This is supposed to be a 'woman's eye view' of Elvis Presley. His fans will consider it a 'worm's eye view'. I'm still bewildered. Last night's contortionist exhibition at the Auditorium was the closest to the jungle I'll ever get. But it wasn't the Memphis wiggler who's the 'missing link' - it was his audiences, in Ottawa and elsewhere. I don't know if his gyrations excite them, or merely give the teenagers chance to let off a lot of steam. But, let off steam they did, and I have my headache to vouch for it.

... Many of the squealing, shrieking girls lapsed into crying jags, apparently frustrated by their inability to touch their idol. Some became hysterical. Others seemed to go berserk. First aid station attendants said some girls, upon regaining consciousness, didn't wait for medications, but bounded out of bed and darted back into the arena to avoid missing anything. Martha Shafer, 15, from 10025 Norwood Avenue, Des Plaices, a sophomore at London township high school, collapsed after triumphantly touching a part of the platform where Elvis had stood, shivering and sobbing ...

... Glittering in an unborn calf skin suit, which was completely covered with 24-karat gold cloth, and 24-karat gold shoes, Elvis seemed to be somewhat groggy as he greeted the record crowd. Assuming his provocative stance, he tilted the microphone, embraced it and began rotating his pelvis. The words he sang were inaudible because of the roar, but, a reporter was assured, it didn't make any difference because most were kids who knew the lyrics by heart. As Elvis bounced across the stage and came to a jarring, grinding halt, his enthralled devotees exploded into a shrill crescendo ... 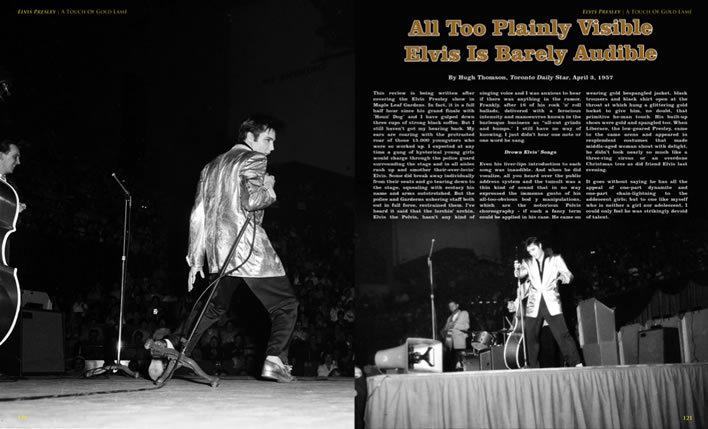 God Is My Refuge

After such an amazing year, the continuing controversy in the media, plus such astounding adoration from his fans and the explosion of his popularity overseas, at the end of 1957 the enormous impact Elvis was having must have been truly hard for him to comprehend.

... If there are people who feel that there is some secret meaning, some evil implication in the way I perform, I can only tell them, right from my heart, that they are wrong. I wish the people who criticize me would try to remember how they felt when they were young. Maybe a lot of them didn't think Sinatra was the greatest, or that Rudy Vallee was the Vagabond Lover. But at least they could understand why their friends felt that Sinatra was the best or why the girl of yester-year experienced a funny kind of feeling over a Rudy Vallee record. Why can't they understand that some people like to hear me sing? Those who don't like the way I perform on stage - go to see someone else. That's the way it should be. I wish there was some way I could get everybody to understand that. People have a right to their opinion. ...

I have as much fun as I can. In that respect, I don't think I'm any different than any other young fellow ... I think that most people if they think about it, can remember doing the same things when they were young.

But no matter what I do, I don't forget about God. I feel he's watching every move I make. And in a way, it's good for me. I'll never feel comfortable taking a strong drink and I'll never feel easy smoking a cigarette. I just don't think those things are right for me ... 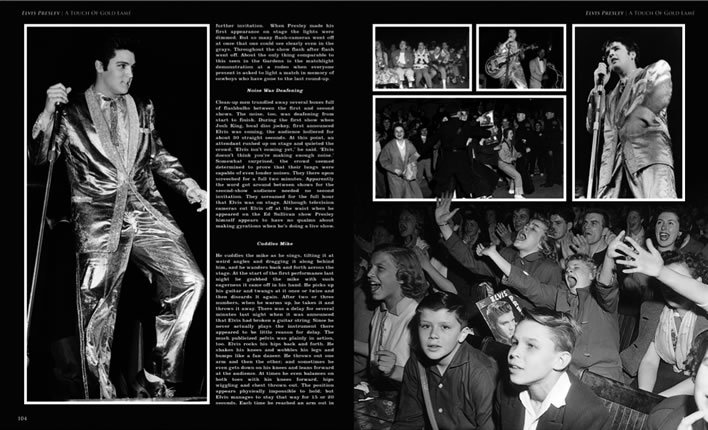 A gold suit, an oft-plucked guitar and a sideburned bundle of the most enchanting, gyrating, and just plain droolin', rock 'n' roll charmer ever to hit this world, plopped right into the laps of thousands of hysterical Portland teenagers on Monday. How they loved it! They jammed the Union station, the Multnomah Hotel, the stadium gateways. They thrilled to every word, every breath of the famed entertainer. Here was heaven, a haven In an otherwise conservative life of studies, dishes and mowing the lawn. Here was a miracle wrapped handsomely in a single package - a miracle wearing the exciting name of Elvis Presley.

I was completely shook up Monday night. Who wouldn't be after exposure to two Elvis Presleys, in one evening? There's definitely the on-stage Elvis and the off-stage Elvis. And there was an equally shakeable Elvis in his dressing room for the mass press, radio, and TV interview before he donned the gold jacket to enter the stadium. This Elvis was impeccably clad in black slacks and shoes, white shirt with handsome black and silver tie and stickpin, and a suave, light blue dinner jacket. The off-stage Presley answered the countless questions fired at him during the interview - a few of them sharply barbed - with poise and good humor. Concerning Anita Wood, the glamor-girl whose name is romantically linked with his, he said: 'There's nothin' serious. We're more than friends, but nothin' serious'... 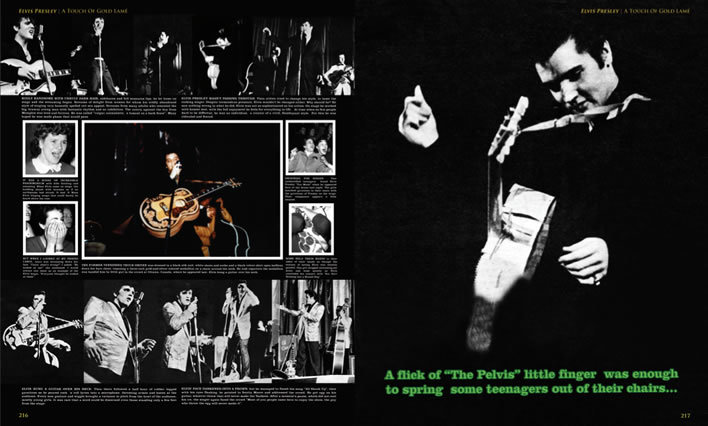 In a word, Essential!

The wealth of material in this book is stunning and with 420 pages of glorious photographs and articles of Elvis on tour you will keep coming back to this book until it is worn out!

Elvis : The King Of The Jungle : The Ultimate '68 Comeback Special Book

'Elvis At The Mississippi-Alabama Fair and Dairy Show Tupelo' by 'The Elvis Files' author, Erik Lore

Erik Lorentzen's KJ Consulting will publish 'And Then There Was Elvis', a 400-page hardcover book co

From Erik Lorentzen is the new mega Hardcover book, 'The Reno Brothers' about Elvis first movie, '

Following the release of the 5 volumes of the Elvis: That's The Way it Is Summer Festival Hardback b