Sony Music will release Elvis Is Back!: Legacy Edition (2-CD) on March 1st. This is an odd but interesting release as it combines both Elvis' classic album, Elvis Is Back with his second, non movie, secular album released after he returned from the army, Something For Everybody. This upgraded CD features the original LP tracks as well as the 12 songs chosen for singles for each respective album, and every track is sublime. Both CDs highlight how the addition of the single releases (It's Now Or Never, A Mess Of Blues, Are You Lonesome Tonight? and His Latest Flame, Little Sister, Good Luck Charm) of the time would have benefited each album if some or all had been added. It was customary to not include singles on albums.

Rave Review From Rolling Stone For Elvis Is Back! 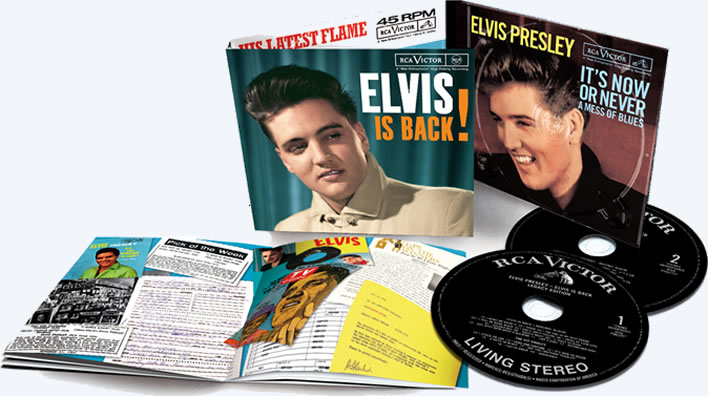 Currently available are the two albums in the FTD Classic Album series, for the serious fan they contain not only the album tracks and singles but also many out-takes (usually referred to as alternate takes) as Elvis went through the recording process. These offer a glimpse into how Elvis recorded, and indeed produced his albums and songs, it is often a delight to listen to Elvis talk or joke between takes and often you can find an alternate take that you really love that is just special to listen to. These are for the real fans out there!

Buy Elvis Is Back! Legacy Edition

Pre-order this Sony legacy Edition now, or buy the two Special Edition albums as below ....

Make Me Know It
Fever
The Girl Of My Best Friend
I Will Be Home Again
Dirty, Dirty Feeling
Thrill Of Your Love
Soldier Boy
Such A Night
It Feels So Right
The Girl Next Door Went A'Walking
Like A Baby
Reconsider Baby
Stuck On You
Fame And Fortune
It's Now Or Never
A Mess Of Blues
Are You Lonesome Tonight?
I Gotta Know
Surrender

There's Always Me
Give Me The Right
It's A Sin
Sentimental Me
Starting Today
Gently
I'm Coming Home
In Your Arms
Put The Blame On Me
Judy
I Want You With Me
I Slipped, I Stumbled, I Fell
I Feel So Bad
(Marie's The Name Of) His Latest Flame
Little Sister
Good Luck Charm
Anything That's Part Of You

Elvis Is Back - A Must have album

Elvis Is Back! ..... Elvis returned to Nashville's Studio B on March 20th 1960, just 15 days after coming home from his army stint for Uncle Sam. Elvis had been away from the music scene for nearly 2 years and the charts were no longer full of the excitement of fifties Rock 'n' Roll but had given way to a smoother sixties sound. Elvis knew too well that just one year out of the music business can kill your career and, although he had made some home recordings while in Germany, Elvis hadn't recorded in a Studio since June 1958!

Would his new sound even be relevant?

Of course, Elvis always rose to a challenge and tended to produce his best work under pressure. When the session finished there could be no doubt that from his explosive first recording 'Make Me Know It' to the very last moment, as dawn was breaking, 'Reconsider Baby' this might be the best music that Elvis would ever produce. In an amazing two nights work Elvis recorded eighteen classic tracks including seven Gold records! When the LP was originally released surprisingly it did not sell as well as expected, and GI Blues would sadly do better. However, had it included the mega-selling Hit singles recorded at the same session (Stuck On You, It's Now or Never, Are You Lonesome Tonight) there is no doubt that it would have sold multi-millions.

Now, at last, this upgraded CD features the original LP tracks as well as the 12 songs (Stuck On You, Fame And Fortune, It's Now Or Never, A Mess Of Blues, Are You Lonesome Tonight?, I Gotta Know, Surrender and I Feel So Bad, (Marie's The Name Of) His Latest Flame, Little Sister, Good Luck Charm, Anything That's Part Of You) chosen for singles for each respective album, and every track is sublime.

From the exciting feel of Elvis blasting away that Army despondency on his first recording 'Make Me Know It', to the beautiful pop of 'Girl of My Best Friend' & 'A Mess Of Blues', the pure musical genius of the blues of 'Like a Baby' & 'It Feels So Right' along with the emotion in the ballad 'Soldier Boy' - Elvis covered every musical style.

While the Gold singles are well-known, two LP tracks also stand out as some of Elvis' most important recordings of all-time. 'Reconsider Baby', recorded in one magnificent live-take, captures Elvis as he is consumed in the passion of the music and working with such a great band. The wailing sax of Boots Randolph combined with Elvis' intense vocal is hard to beat. Similarly Elvis' growling moan of 'Such A Night' pushed this lightweight Drifters' song into another league all together. Here the new idea of using dual drummers (Buddy Harman & DJ Fontana) never would be bettered, helping urge Elvis an awe-inspiring performance. While Elvis was never recognised as a song-writer, his all-important contribution as an arranger is perfectly demonstrated here. Elvis' whoop of joy at the end really says it all!

This was a very different sound to the Elvis of the fifties, smoother, more mature and with a new beauty and strength to his voice. This was a powerful statement that no one could deny – 'Elvis Is Back!'

There are three Elvis albums that every fan should own. 'Elvis Presley' his essential first LP, 'From Elvis In Memphis' the 1969 comeback LP, and 'Elvis Is Back'. The importance of these 3 LPs cannot be overstated.

From FTD to celebrate its 60th Anniversary year, 'The Elvis Is Back Sessions'. Hailed by many as Elv

FTD is pleased to announce its last release for 2022. It's hoped that this will ship w/c 12th Decemb

Meet Me In Memphis - Elvis as recorded live at the Midsouth Coliseum March 20, 1974 DVD

Follow That Dream (FTD), David English and Pål Granlund bring you 'The Making Of Jailhouse Roc

From MRS a 3CD Deluxe set titled 'Summer Festival 1970 – The Rehearsals'. Preview If you hav