To view postage cost add to cart and then view the shopping cart page.

'Phenomenal and amazing'. That's how Elvis fan Brian Quinn is describing 'Viva ELVIS - The Album', which will be available worldwide on November 9. Here is Brian's review: I have just listened to 'Viva ELVIS - The Album', which was very kindly sent to me by Sony UK and I am not afraid to say I am in tears. It is PHENOMENAL and the sound AMAZING. Truly a listening and emotional experience and genuinely revolutionary in concept which should give it an excellent chance for a Grammy Award next year. This is truly Elvis for the 21st Century.

The whole album is built around a biographical theme with comments from Elvis, Ed Sullivan, Bill Black, Milton Berle etc. and snippets of other Elvis songs apart from those listed on the album cover. This is one album that I will be playing a lot and not just once or twice. Yes, we would have liked more tracks but the ones on the album are longer than usual apart from 'Memories' and 'You'll Never Walk Alone' which are linking themes as shown below. The album cover is very colorful, contemporary, and features a booklet containing many scenes from the 'Viva Elvis' show with details of the cast etc. Now on to my review:

1. Opening
The album opens with the strains of what is commonly known by Elvis fans as 'The 2001 Theme' together with females screaming and chanting 'We Want Elvis'. Great drums featured in the background. Elvis himself comments 'If You're Looking For Trouble'. There are also historical comments from Ed Sullivan and track 1 commences a countdown into track 2. A fitting start to the album.

2. Blue Suede Shoes
Heavy version with drums and harmonica up front. Has a distinct Bo Diddley feel to it and again comments from Ed Sullivan and Milton Berle. Lots of sound wizadry here.

3. That's All Right
Has a great feel to it and commences with a similar opening to 'I Don't Care If The Sun Don't Shine' with comments by Horace Logan and Bill Black. Screaming girls add to the atmosphere. Also snatches of 'When It Rains It Really Pours'.

4. Heartbreak Hotel
This track has a great powerful Blues feel to it and starts out with Elvis doing his famous 'Well, Well Well' routine. A really heavy version follows which quite literally bounces along with great Harmonica/Sax/Brass/Drums and Piano. Snippets of 'Stranger In My Own Home Town' (informal rehearsal) as featured on 'The Essential 70's Masters Box Set. 'Polk Salad Annie' even gets a mention.

5. Love Me Tender
A beautiful duet with a really great female singer and a very contemporary arrangement with acoustic guitar adds up to a real winner. Elvis closes the duet by singing a snippet of 'In My Way' from the movie 'Wild In The Country'. In my opinion this would make a great single release.

7. Bossa Nova Baby
Commences with Elvis making comments in the recording studio to Hal Wallace. We are then treated to an excellent version of this well known track featuring drums/sax/piano/bass and organ. During the song a part of the arrangement is reminiscent of 'Barbara Ann' by The Beach Boys. Elvis comments 'It's Hot In Here'. Ends with a great Boots Randolph style sax. A contemporary version without losing the original feel. This would be a great track for the program 'Dancing With The Stars'.

8. Burning Love
Commences with the famous comment made by Elvis (on the 'Elvis sails' EP) to the Press Corps on joining the U.S. Army. On being asked 'What's your idea of the ideal girl?' Elvis answers with much laughing 'Female Sir'. A heavy version follows with guitar/drums and guitar to the fore. There is also a piece of dialogue included from the movie 'Jailhouse Rock' where Elvis has just kissed Judy Tyler (Peggy Van Alden) and she turns to him in disgust and states 'How dare you think that such cheap tactics would work with me?' and Elvis replies 'That ain't tactics honey, its just the beast in me'.

9. Memories
A short orchestral piece of 'Memories' which is really a means of segueing into

10. Can't Help Falling In Love
This is a really fine contemporary version of this classic track and sung as a duet with a great female singer similar in style to Mariah Carey. Elvis opens the track accompanied by acoustic guitar. Very melodious. Interestingly the track fades out with Elvis repeating part of the song 'Love Me'.

11. You'll Never Walk Alone (Piano Interlude)
A beautiful short piano solo played as if it were Elvis himself and segues into the final track.

12. Suspicious Minds
Great up tempo closer for the album which is heavy on drums/piano/bass and guitar. Similar type female backing group as the Sweet Inspirations. A very melodious version with Elvis urging everyone on near the end shouting 'C'mon, C'mon, C'mon'.

Finally, I would like to make this important point. To fully appreciate this album one needs to treat it as a whole and not just a conglomeration of unrelated tracks. As stated earlier it is truly a unique 'listening experience' and and one that is linked biographically to cover all Elvis eras from 'That's All Right' to 'Suspicious Minds' taking in the 50's, the Movies, the Army, the 68 TV Special and Vegas. Special thanks go out to Erich van Tourneau and his team for this innovative concept in recorded music and to EPE and Sony Music Entertainment for their support for the project. This album will whet the appetite of fans worldwide to go and see the show Viva ELVIS when it eventually goes on tour and bring back fond memories for those who have already seen it.

Is the world really in need of a new Elvis Presley album 33 years after the death of the King of Rock N' Roll? After only one listen to Viva Elvis: The Album, that answer is a resounding yes.

Unlike other post-mortem recordings, Viva Elvis is something truly unique. It's not a rehash of old material, nor is it some obscure second rate 'lost track'. Viva Elvis is an honest reworking of Elvis' greatest hits using original master samples of the King's voice worked into modern riffs and beats.

There's no attempt to make the tracks into dance remixes like A Little Less Conversation; they come across with dignity, respect and care - and that's what makes Viva Elvis unique and magical.

Mastermind Erich van Tourneau (who's Canadian by the way), worked with more than 900 Elvis albums, films, live recordings and studio takes to make more than 17,000 samples of Elvis' voice. With the assistance of Elvis Presley Enterprises, we can finally hear what Elvis would have sounded like if he were recording today. And the results are phenomenal. With 10 songs and two dialog-based cuts, Viva Elvis not only shows how masterful Presley really was, it also shows how van Tourneau really got it. The songs, although arranged with modern production and modern grooves, still manage to keep the original feeling and messages of the songs.

It's hard to rate any of the tracks better than the other, but some stand out more because of the choice of re-workings. Hearbreak Hotel captures a new killer blues feel, while King Creole makes the original recording sound mediocre. I'm more of fan of the upbeat songs, but I was like that with the Elvis originals, so Blue Suede Shoes, That's Alright and a new rocking rendition of Burning Love get my body bopping. Not taking away from the King's softer side, Can't Help Falling In Love and Love Me Tender are soft and sweet, with almost an unplugged feel. Love Me Tender is also recorded as a duet with Quebec pop superstar Marie-Mai, and it works extremely well.

I never would have thought that Elvis would have been a contender to release the best album in 2010, but he's not only accomplished that, he's also reminded me that there was a reason we called him the King in the first place. Long Live The King!!! 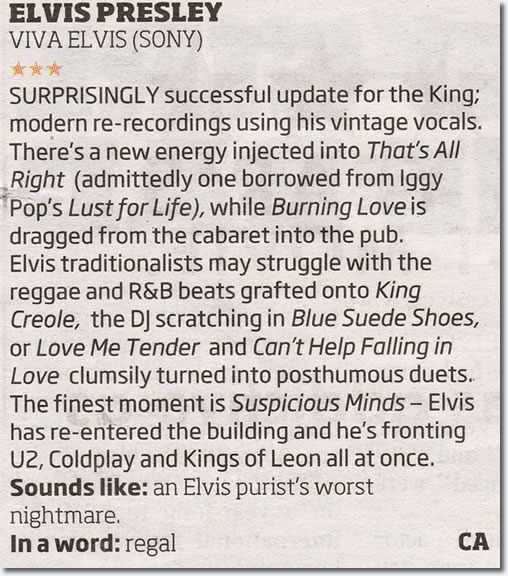 This is Viva Elvis The Album as opposed to Viva Elvis the Las Vegas Cirque du Soleil show, designed to do for The King what the extravaganza franchise's Love did for the Beatles. Except the resulting Fab album was listenable. This, however, is just one of the greater indignities ever visited upon the Presley recording legacy; taking his voice and underscoring it with lotsa dumb stuff (turntable scratching, powerchords, screechy female 'duet' partners) over a dozen songs in a cloth-eared effort to make Elvis all things to everybody. The musical equivalent of a deep-fried peanut butter and jelly sandwich.